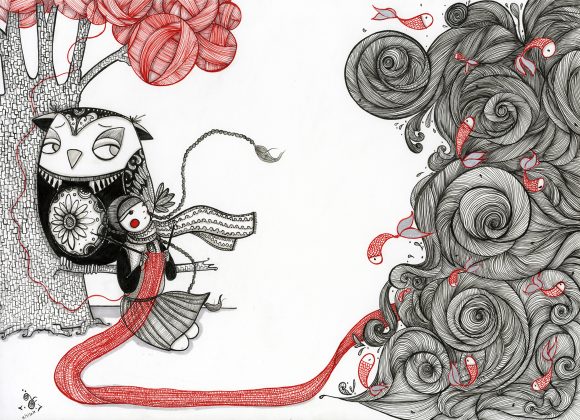 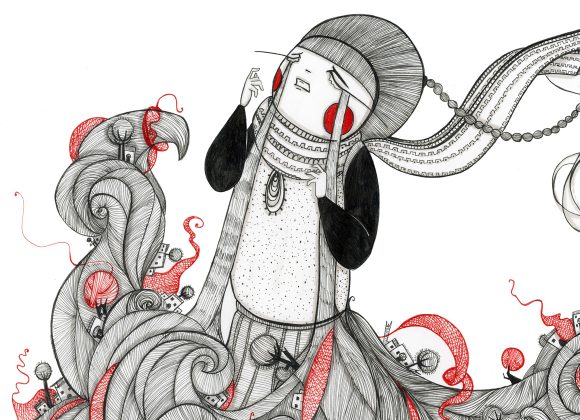 Dima is presenting a series of illustrations from the book Safia’s Sea, written by Zeina Kanawati.

It’s a story of a little girl “Safia”, living in a small cottage with her owl, not able to hear or talk, but always able to knit the cloths for all the people living in the village, using the red yarn of the red yarn tree near her cottage. When the war started, everyone left the village, but Safia stayed as she didn’t hear the noise of the battle, and she continued to knit a piece which became the size of the cottage itself, waiting for someone to pass by and take it. When the fire of the war reached Safia, she felt the burn and the pain, and she started to cry endlessly. The tears turned into the big sea, which covered the whole village, and turned it into clear, blue water. The tears of a little girl stopped the war, and ended a story the way it should be.

Dima Nachawi was born in Damascus Syria, in 1980. She is an illustrator, storyteller, and founder of “Memory Initiative for Syrian Culture” (MISC). She creates illustrated stories that reflect her personal memories in addition to the collective memories of Syria as a nation. Through her art she advocates for human rights issues focusing on prisoners of consciousness and the forced disappeared